In my previous post, I looked at how Liverpool seemingly focussed upon crossing last season and how it was on the whole unsuccessful, at least in open-play. One thing that I noted was that crossing from set-pieces appeared to be more successful in terms of goals scored than crosses in open-play.

The average number of crosses per goal scored last season was 79 in open-play and 28.3 from a set-piece. Crossing accuracy is also higher for set-pieces (33.9%) compared with open-play (20.5%). This demonstrates that crossing is more effective from set-pieces than in open play.

So the question is: Which teams were particularly efficient at scoring from set-play crosses and how did this contrast with their open-play performance?

As with the crosses from open-play analysis, there are several under and over-performers in terms of crosses from set-pieces. Furthermore, some teams score a large proportion of their goals from crosses. 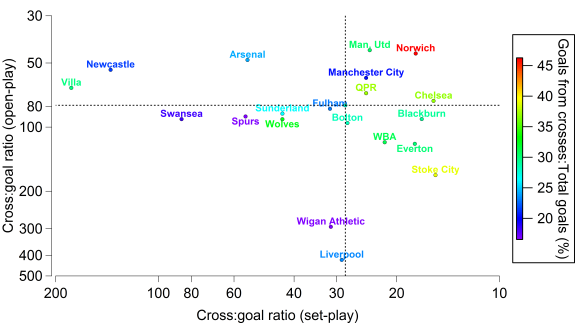 Stoke conformed to their stereotype here as they led the way marginally from Chelsea, as they required 15.4 crosses per goal at a set-piece compared to Chelsea’s 15.6. Chelsea scored 14 goals in total from set-pieces, while Stoke scored 10. Other notable performers were Blackburn (16.9), Norwich (17.6) and Everton (17.7). Norwich were probably the most efficient crossing team in the league last season, as they scored frequently compared to their peers from both open-play and set-pieces. In fact, 46% of their goals came from crosses last season, ahead of Stoke (39%), QPR (37%) and Chelsea (37%). Whether such numbers will be sustainable next season could be crucial for Norwich under Chris Hughton.

Aston Villa (180), Newcastle (138) and Swansea (85.5) were the clearest under-achievers, as they only scored 4 goals from a set-piece cross between them. In contrast to their severe under-performance in the open-play crossing analysis, Liverpool were about average as far as set-piece crosses were concerned. Indeed, Liverpool scored 9 goals from set-piece crosses last season, which was joint third with Blackburn, Everton and West Brom.

Getting to the byline

One of the aspects of crossing that I find curious is the poor success rate of crosses in terms of their accuracy. At first glance, the accuracy of crosses appears to be uniformly low; 23.4% for all crosses, with Arsenal posting the lowest (21.5%) and Norwich having the highest (27.3%). Accuracy is even worse in open-play, where it drops to 20.5% on average last season. Norwich are again the highest (24.8%), while Bolton had the lowest (17.2%). The overall crossing accuracy figures are skewed by the greater accuracy from set-piece crosses, which on average were accurate 33.9% of the time. Newcastle had the lowest accuracy with 23.9%, which was far lower than any other side (Liverpool were next lowest with 29.1%). Such a low accuracy goes some way to explaining their poor efficiency from set-piece crosses. The contrast to this is Aston Villa, who amazingly had the highest set-piece cross accuracy with 41.7% but could only score 1 goal from a set-piece cross all season.

This greater range and contrast in crossing accuracy when they are broken down potentially points towards a level of granularity in the crossing data, that is not separated by the coarse definition of crosses used here. Ideally, the crosses would be separated by the position from which the cross originated, along with defending and attacking players positioning. EPL-Index include “byline crosses” in their crossing database, which is a start as it shows that such crosses are far more accurate on average (47.8%). If we assume that successfully crossing to a team-mate is the first stage in potentially creating a chance to shoot and subsequently scoring, then it would appear that byline crosses are a far better option than other crosses in open-play; open-play crosses excluding these byline crosses have an accuracy of 19.7%.

Sadly I don’t have enough information available to assess whether byline crosses are a more efficient means of scoring from a cross plus the sample size is relatively small compared to total open-play crosses on a team-by-team basis. Some teams essentially never get to the byline and cross the ball; Stoke attempted only 2 byline crosses all season. Only Manchester City (50), Arsenal (47), Liverpool (34) and Manchester United (31) really attempted enough to draw even tentative conclusions. However, it would make sense if such crosses were a more effective means of scoring from a cross as they are often attempted closer to goal, which may result in an easier chance for the receiver.

Based on last season, set-piece crosses are a more efficient means of scoring than open-play crosses. There are likely a multitude of reasons for this, one of which is possibly the superior crossing accuracy from set-pieces compared to those in open-play. The greater parity in numbers between attackers and defenders could be another reason plus the more specialised headers of the ball, such as centre-backs, could be used to greater effect at set-pieces. One potential method of extracting more value from crosses is to attempt them closer to the byline, where the accuracy is far greater than other open-play crosses but at present I don’t have enough data to fully explore this idea.

Overall, scoring from a cross does not appear to be a particularly efficient and direct method of providing goals. However, it could be argued that a goal may indirectly result from a cross; the “in the mixer” approach, although this is likely to be particularly subject to the vagaries of luck and is more applicable to set-pieces. Based on last season, a team will on average score a goal from a cross in open-play every 79 crosses. Even the best performers in the league needed 45 crosses on average to score a single goal. The average number of open-play crosses per game attempted by a team last season was 17, which suggests that over the long-term, a team can expect to at best score a goal from an open-play cross every 2-3 games. Crossing, especially in open-play, appears to be a low-yield method of scoring.

If Liverpool had been merely average last season, the 841 open-play crosses they attempted would have yielded an extra 8 goals. If they had been exceptional, they could have expected another 16 goals. The question is whether this is a good enough return to motivate basing your playing style upon over the long-term?

In some recent interviews, Simon Kuper has suggested that Liverpool established a data-driven style of play focussed around crossing last season. He theorised that Liverpool attempted to cater to Andy Carroll’s heading strengths by buying players with good crossing statistics, such as Stewart Downing and Jordan Henderson. Kuper then goes on to state that such an approach is flawed due to crossing being an inefficient means of scoring goals.

Earlier in the season, the Guardian’s Secret Footballer also suggested that statistical principles guided Damien Comolli towards a crossing focussed approach in the transfer market. Andrew Beasley conducted an excellent analysis for The Tomkins Times on whether the data indicated that such an approach (along with some others) was actually working.

So the question is: Did Liverpool really pursue a strategy based around crossing last season and to what extent was it successful (you can probably guess the answer to the second part)?

Firstly, Opta define a cross as:

A pass from a wide position into a specific area in front of the goal.

The basic numbers show that Liverpool attempted more crosses (1102) than any other team in the Premier League last season. Manchester United (1018) and Wolves (999) ranked second and third respectively. At the other end of the scale, Blackburn (610), Fulham (649) and Swansea (721) attempted the fewest. The average per team was 837.2 crosses attempted, which equates to just over 22 crosses per game.

While the raw numbers provide a guide, it is possible that the figures could be skewed by how much of the ball a particular team has on average. For example, Wolves had much less of the ball than Manchester United last season but attempted a similar number of crosses. This suggests that Wolves were keener to attempt crosses than Manchester United. Furthermore, set-plays should be isolated from the total crosses, as teams may have different approaches in open-play vs set-play. In order to account for this, I’ve calculated the ratio of attacking half passes to total open-play crosses in the graph below. This gives an indication of how keen a team is to attempt a cross during open-play. I limited the passing to the attacking half only as this is where most (if not all) crosses will originate from and it avoids the data being skewed by teams that play a lot of passes in their own half.

Similarly to this tweet by OptaJoe, I calculated the average number of open-play crosses that each team in the Premier League required to score a goal from an open-play cross last season. This is shown in the graph below versus the number of attacking half passes per open-play cross. 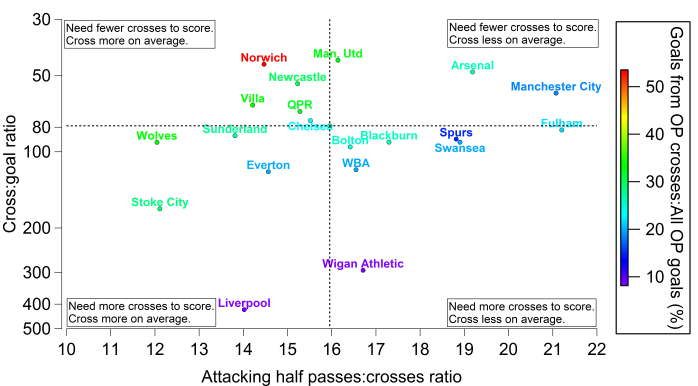 The major issue for Liverpool based on the above analysis was that their conversion from crosses was simply atrocious. They required a staggering 421 open-play crosses to score a single goal in open-play on average last season. This was the worst rate in the whole league, with Wigan the closest on 294. Contrast this with the likes of Manchester United (44.5), Norwich (45.1) and Arsenal (48.4) who were the only clubs to post a value below 50. Furthermore, only 8.3% of Liverpool’s goals in open-play came from an open-play cross. Norwich scored 53.3% of their goals in open-play from open-play crosses

Liverpool seemingly embarked upon a style of play that provided them with a extremely poor return in terms of goals (only 2 goals from an open-play cross all season).

Is crossing the ball an inefficient means of scoring?

The above analysis seemingly demonstrates that Liverpool did indeed pursue a style of play centred around crossing. Liverpool’s apparent quest to show that crossing is an extremely inefficient means of scoring last season (I’m personally still trying to forget those 46 crosses against West Brom at Anfield) potentially clouds the more general question of whether crossing is a tactic worth basing your team around. It could be that crossing can be an efficient way to score but Liverpool were just simply not very good at it.

According to WhoScored, 659 goals were scored in total from open-play, while 241 goals came from set pieces (excluding penalties). The data from Opta show that 166 and 128 goals were scored from open and set-plays respectively. Thus 25% and 53% of all goals in these categories came from crosses. The average number of crosses per goal scored last season was 79 in open-play and 28.3 from a set-piece. Crossing accuracy is also higher for set-pieces (33.9%) compared with open-play (20.5%). This demonstrates that crossing is more effective from set-pieces than in open play.

The above analysis demonstrates that Liverpool pursued a playing style overly focussed upon crossing, which yielded very meagre returns. Whether the poor return was a symptom or a contributing factor to their generally poor shot conversion isn’t clear at present and requires further analysis.

The more general question regarding whether crossing is an efficient means of scoring is difficult to assess without more analysis. This study shows that crossing at set-pieces is more efficient than in open-play but to fully answer this question requires comparison with other modes of scoring. The above analysis suggests that structuring your team around crossing in open-play is a very low yield method of scoring, which also results in the loss of possession close to 80% of the time.

Liverpool’s addiction to crossing appears to be a recent trend. In the 3 seasons prior to 2011/12, they averaged 16.4, 15.4 and 15.5 attacking half passes prior to an attempted cross. Swansea under Brendan Rodgers averaged 18.9 last season, which potentially suggests that next season Liverpool will try to kick the crossing habit.